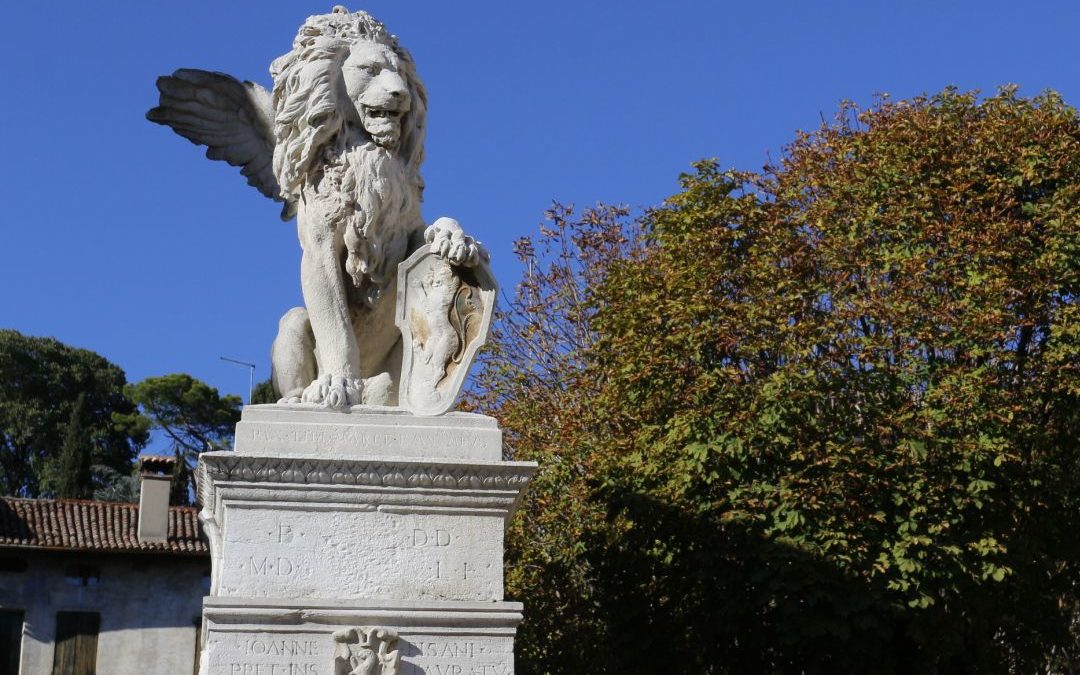 Padua is included in the UNESCO World Heritage list thanks to Giotto’s Scrovegni Chapel and the oldest Botanical Gardens in Europe. It counts with an ancient University (1222), whose faculty of Medicine preserves the oldest stable Anatomical Theater (1594) in the world.
The Euganean Hills (in the Province of Padua) were renowned for thermal SPAs already in Roman times and still nowadays their wellness centres are very popular for hydrotherapy, treatments and watercures. The countryside is scattered with villas (like Villa Cornaro by Andrea Palladium) and Medieval Castles with fortifications (like the walled towns of Monselice, Cittadella or Montagnana).
In this area they produce a delicate P.D.O. Extra-Virgin Olive Oil, perfumed wines like Moscato Fior D’Arancio, P.D.O. cheese like Montasio and Grana Padano and a fabulous sweet P.D.O. Ham. The variety of the territory is reflected in the culinary traditions. For pasta lovers we recommend not to miss the bigoli (thick spaghetti) with duck sauce or potato gnocchi; as a second course poultry meat with herbs from the field is popular.

Vicenza is the city of Palladium, the only architect to give a style a name. The whole centre as well as the numerous villas in the Province are listed in the UNESCO sites. How can one miss a visit to Teatro Olimpico (the Olimpic Theatre), the first and most ancient covered stable theatre in modern times (1585)? Vicenza is also Europe’s most important centre for goldsmith art. Bassano is also a beautiful town built around busy and elegant squares. It is popular for artistic ceramic and the best grappa (sort of brandy). From the enogastronomic point of view the area offers a lot of first quality products: the white asparagus, the cherry from Marostica, the D.O.C. Gambellara and Breganze wines. A typical main course is Baccalà alla Vicentina (codfish) served with polenta.

This small town has a charming walled centre with elegant fashion stores and good wine bars, since aperitif is a real must here.
Palladium left in this Province masterpieces of architecture, like villa Barbaro and villa Maser. Besides Palladium, also the architect and scultor Antonio Canova was born close-by and built in his home town, Possagno, an imposing temple. At Altivole, instead, one of the outstanding personalities of the XXth century is buried: the archistar Carlo Scarpa. Forty minutes drive from Treviso is also one Italy’s most beautiful villages: Asolo. A walk through its quiet and elegant centre is not to be missed.
One can easily combine an architectural tour with a wine tasting experience.
More and more people go every year to the Prosecco wine district, which was recently included in the UNESCO World Heritage list as representative of an ideal interaction between man and environment. A drive through the winding streets of Valdobbiadene makes you feel in paradise and the visit to a couple of wine cellars will cheer you up! Treviso is the home to good food: cheese, cured meat, chicory and, last but not least, the Tiramisù.

Verona is the town of Romeo and Juliet, the two unfortunate lovers made immortal by Shakespeare. Verona counts with many Roman remains, like the popular amphitheatre called “Arena”. A walk through its centre offers artistic and historical itineraries and wonderful views on the Adige river. In the whole Province one passes from Medieval Castles, belonging to the Guelfs and Ghibellins factions, to amazing villas, dating back to the time of Venice government, and the Hapsburg fortresses (1854).
Right outside town and uphills is the Valpollicella area, one of Italy’s most popular wine district. Here you can taste the ruby wine that takes its name from the valley (the Valpollicella) and the full-bodied aged Amarone wine.
Less than 30 minutes away from Verona is Lake Garda. Here you can relax admiring the surroundings and strolling in the beautiful villages of Peschiera, Sirmione, Lazise or Bardolino (also the name of another good wine).
All around lake Garda are olive and lemon trees, whereas in the plain the best Vialone Nano rice is produced, together with potatoes, peaches, chicory and asparagus. The most popular cheese is the D.O.P. certified Monte Veronese. During Christmas time you can flavor the excellent Pandoro, a soft buttery and raised cake shaped like a star.

When you say Belluno you say Dolomites! This unique mountain landscape offers immense emotions to the visitors thanks to its high rocky peaks and its almost incontaminate nature. All your senses are alive because you breath a clean fizzy air that spreads the smell of trees and meadows. Cortina, the queen of the Dolomites, is well popular among ski lovers but it is much appreciated also during the nice season by hikers and all those who want to escape from the heat and the congestion of towns. Since the Province of Belluno is almost entirely mountainous, villages are quite small and made of a few chalets and a small church. These mountains gave birth to great artists like Titian (Pieve di Cadore) and Sebastiano Ricci, who paid homage to their land in many paintings.
Food is excellent and rich. Among the specialties we suggest the barley soup, the “cansunziei”, ravioli stuffed with beetroot and the “pastin”, a mix of minced meat grilled and served with polenta.